At the same time, professional volleyball is extremely difficult and physically demanding. Athletes are required to dedicate their lives to the sport, and it just so happens that doing so turns you into a model of fitness.

There are sexy professionals of both genders, but we’re here to give you a rundown of the hottest female volleyball players in the world.

Note: This is a difficult list to make, as beauty is in the eye of the beholder and we had to sort through a world of teams, but we feel that we’ve found the 10 most universally admired volleyball players in the world.

From the age of 9, Marta Menegatti has been honing her exceptional volleyball skills. She began playing beach volleyball in 2006, and soon found herself selected to play on her country’s team.

As a member of the Italian national women’s team, she dedicates much of her time to improving herself in order to perform. While she’s not playing, though, she’s a self-described bookworm and movie buff who visits her family whenever possible.

She attributes her fine physical appearance to a dedication to “never let yourself go and neglect your body.” It seems to be working out for her so far, and we commend her for her efforts! She’s certainly one of the hottest volleyball players in the world today.

Nina Betschart is a player for Switzerland’s national volleyball team, and she certainly qualifies for our list of the hottest female volleyball players. Nina is 22 years old and won gold with her partner Nicole Eiholzer in the 2015 European Games.

She has also won gold on seven other occasions in the last four years, which is extremely impressive for a person of her age. Her life isn’t limited to volleyball, however, and she seeks to get a degree in the near future. Her hope is to work in psychology, preferably working with children when she gets her degree.

Sunniva plays for Stetson University and is primarily dedicated to beach volleyball. It’s easy to tell that she is enjoying her life to the fullest, however, and she does not just sleep in the hotel on her various trips around the world.

She has been performing professionally since she was a minor, so the gift she has for volleyball is certainly natural, and she’s one to watch out for in the future.

Zara is a 32-year-old player for the United Kingdom, and she is an extremely well-respected player. She was selected as one of two players to compete in the qualifications for the 2012 Summer Olympics for Great Brittain.

On top of this, she earned a law degree before she set out on her path to becoming a great professional volleyball player. She didn’t start professionally until 2009 after she finished her undergraduate degree. The Federation Internationale de Volleyball tour was her first major circuit, and she was on the first Great Brittain team to play in it for almost ten years.

While Zara didn’t place in the Olympics, she was still a trailblazer for the Great Brittain volleyball team and will always rank in our hearts as one of the world’s hottest players.

Anouk is a Swiss volleyball player and may be one of the world’s most stunning athletes. She was a competitor at the 2016 Summer Olympics, where she and her partner, Joana Heidrich finished 9th overall. This team, however, did compete in the World Tour Finals and win bronze.

In her free time, Anouk loves taking dancing classes, going to concerts, and has a vested interest in saving the environment. She does, however, dedicate most of her time to practicing and playing volleyball professionally. 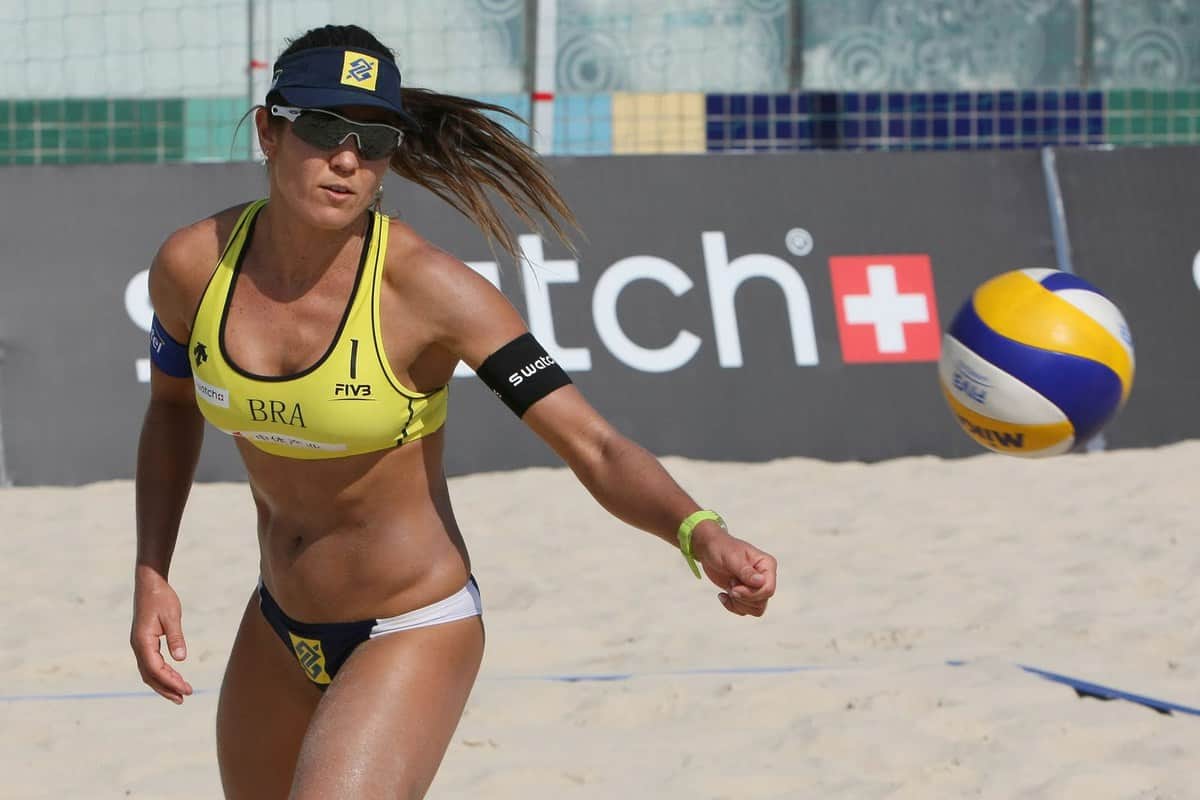 Maria is a player for the Brazillian national team and is 34-years-old. She competed in the 2012 Summer Olympics and was disqualified early on, unfortunately.

She is widely seen as one of the most physically fit volleyball players, and that is part of the reason that she has been able to perform extremely well in her long career as a professional volleyball player. Her physical fitness and dedication are also parts of what makes her one of the hottest players in the world! 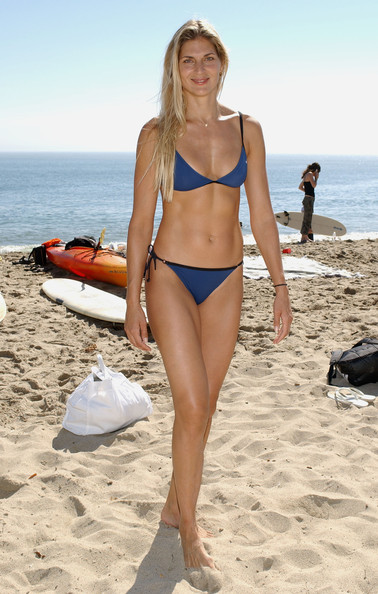 Gabrielle Reece is an American volleyball player who is known for her activity in a number of fields. She is an announcer, professional player, model, and actress. She was born in California but raised in the U.S. Virgin Islands until she was around five years old.

Her father tragically died in a plane crash when she was 5-years-old, prompting her family to move back to the mainland of the United States. This is when she took up her interest in sports. Since then, she has become a world record holder in blocks and has made a serious name for herself in the modeling world.

Reece was on the first ever team to win the Beach Volleyball World Championships, and this was during her time as a team captain in the Women’s Beach Volleyball League. She was ahead of her game in the nineties, raking in leadership in league kills and blocks, as well as gaining an award for offensive player of the year.

She began her modeling career while she was in college, and there’s a great detail of her perspective on the industry. Her photos appear in the magazines Outside, Playboy, Life, and Women’s Sports and Fitness. She doesn’t stop there, either.

She had a regular column in Women’s Sports & Fitness and was the contributing editor for Elle at one point. As we’ve mentioned, she was also a sportscasting host for ESPN and NBC.

Jennifer Kessy is an another American born professional volleyball player. While she is retired, she did carry out a successful career in volleyball and has progressed onward to becoming a coach. She grew up in California as well, finding that she excelled at whatever sport she played.

She was an excellent swimmer, volleyball player, and student, and moved on to play volleyball for USC. She was a starter every year she played for that team and was given the honor of being an All-American. At the same time, she played for the Junior National Team with decent success.

Her degree was in History, but she was so successful in volleyball that the game would sustain her financially throughout her twenties and thirties. She still loves and teaches the game. Kessy performed exceptionally well in her career, though, and was typically ranked among the top players in the world.

She and her partner won the World Championships in 2009 and were talented enough to win the silver medal in the 2012 London Olympics. Their team lost to another American team, however, so the loss wasn’t so harsh. She played through the 2015 season, skipping only 2014 for the birth of her first child.

She now coaches for the number one team in the United States. As a wildly successful player, she ended her careers with the awards of All-American, Most Improved Player, Best of the Beach (of which she is the only player to receive twice), and USA Volleyball Beach Team of the Year.

Marketa Slukova is a Czech professional player and has had a huge amount of success in her career. She has been consistently ranked as being on one of the top teams in the world and holds the title of most successful beach volleyball player ever to be born in the Czech Republic.

In 2010, she was given the title of Tour Top Rookie for the FIVB World Tour. She and her partner, Kristyna Kolocova were selected to compete in the 2012 Summer Olympics in London where she won 5th place. She is also the owner of 3 FIVB gold medals from Prague, Berlin, and Antalya.

She’s still playing at the top of her game and shows no sign of slowing down. She’s widely considered one of the, if not the, sexiest beach volleyball players ever, and continues to hold down the fort in our hearts. Hats off to you 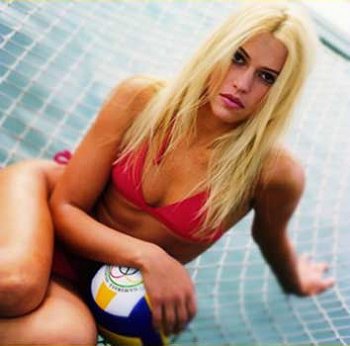 Ana is a well-known volleyball player, but her work in modeling has attracted the most interest from fans. It’s unusual for volleyball players to dedicate more time to modeling than volleyball, but ana has posed for a few shots that would have nearly every human being weak in the knees.

She is a professional player that was born in Sao Paulo, Brazil. Beach volleyball is her official occupation, but modeling seems to be her true calling. At the age of 46, she is still killing it with her modeling career.

There is little information on Ms. Mencino, likely because her career took place largely before everything was documented and put on the internet. She was likely in the league from roughly 1989 to the early 2000’s, and her modeling career lasted well into the 2000’s.

We do know, however, that she began playing volleyball at the age of twelve. After exiting the league, her modeling career began to skyrocket, and she’s considered one of the world’s sexiest athletes ever. This may because of the style of her modeling.

She typically poses in positions that are sexier than her colleagues, and she does an exceptionally good job modeling. While she has never been a nude model, she’s done a number of shoots that are as close as a person could get to being nude.

The world of women’s beach volleyball is stuffed with beautiful people, and some of them just didn’t couldn’t fit in the top ten. Take Rocio Miranda, for example, who is incredibly beautiful by any standard.

It would be an injustice not to mention a few of the close calls.

Talita is a Brazillian player that is best known as a blocker. She was rookie of the year when she played in 2005 and won the World Tour two times. She was first noticed by an Olympic World Champion when she was 19 and had an extremely successful career with numerous partners from that point on.

Madelein is a professional player from the Netherlands. She performed in the 2012 Olympics, unfortunately losing to a Brazillian team in the 16th round. She continues to play professionally and competes with her partner, Sophie van Gestel.

She also competed in the 2016 Summer Olympics with her partner, Marleen van Iersel. In this Olympic too, they lost in the 16th round. Two visits to the Olympics is difficult, however, and she is widely respected.

Sabina is a professional player from Kazakhstan and is 21-years-old. She has become a huge internet sensation and consistently racks-up a huge following on all of her respective social media accounts. From Instagram to Facebook, to Youtube, she has tens of thousands of followers.

She also has hundreds of thousands of view on some of her videos. She has a huge effect on crowds, and her coaches claim that it’s difficult to play when she is on the beach because the fans go so wild when they see her.

She’s also a very intelligent person. She was sent to a boarding school for gifted children when she was young and had hopes of becoming a lawyer before she entered the field of beach volleyball. She gets her gifted intelligence and athletic ability from her parents, who were also professional athletes at one time or another.

The hottest female volleyball players are only a small drop in the ocean of beautiful athletes. It’s worth looking into other sports as well to get insight on these interesting people.

If you’re looking for more lists of beautiful people, we have everything you need.